Still camera recorded the inside of a regular apartment in Tehran in different natural lighting conditions. By encouraging the high grain quality of the images produced by the camera (a small Canon PowerShot compact camera—with the limitation of maximum eight seconds continuous recording) the shapes are purposely blurred, so that the focus can be directed to the reflection quality of light alone in that certain architecture. The familiar living house is in first step defamiliarized with the camera angle and light intensity to increase the noise by looking at dark corners. An space full of recognizable objects that function in affordance perception (an affordance is often taken as a relation between an object or an environment and an organism, that affords the opportunity for that organism to perform an action,) is abstracted from the symbolic value of the objects and the semiotic connotations of the life lived in this house (artist's parent house in the winter of 2008 before a radical renovation). These elements are suspended by the use of a low resolution video recorder, to highlight another ephemeral quality in that space, which contains the shadow of its inhabitants, fascination with volume, aiming to portray its pure architectural space, and a more delicate investigation of the premises of feeling a space in a private/living environment. 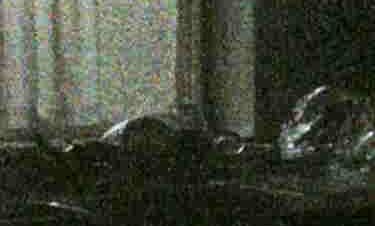