Relaxing Horror Tales for Children and Adults
The video installation Relaxing Horror Tales for Children and Adults is an intermediary apparatus that provides viewers with the immersive experience of a children’s album of deconstructed fairy tales. Using the classic Pepper’s Ghost illusion, the work mines the historical concept of childhood. The artist locates memory lapses, unstoppable rage, stuttering, and unconscious idioms, which are often associated with the incompleteness of a child’s comprehension, in his production of new, organized fictions for adults. Composed of disjointed performances, spoken word, and various audiovisual elements, the story-image narrative is knotted by many discontinuous lineages and characters of puppetry, folk literature, and demonology in Czech and Persian cultural milieus. Relaxing Horror Tales is a modest engineering of perception—emerging from an artistic experiment instead of psychoanalysis—that invests in the wonders of ambiguities, a pleasant non-dissolution of childhood in adulthood.

Childhood is a relatively new historical concept. It was in the early modern understanding of “tabula rasa” in the seventeenth century that John Locke asserted easy pleasant picture books be made for children. Trying to go to the prehistory of understanding, philosophers looking for the clean slate, Locke's tabula rasa is where language supposedly start-ups and memory can be investigated. Perhaps modern writing is children's literature. Relaxing Horror Tales for Children and Adults traces two storylines one about robots and the other about shadows. The installation is a semi-reflective glass that intervenes two projected videos as a way of engineering an apparatus of story-images in space. “Pepper's ghost” was an optical engineering trick of the 19th century ghost illusionists. As a popular genre of “wonders of seeing,” pepper's ghost was used in museums, theaters and amusement parks, and was part of a larger emerging mechanization of perception. Pepper's ghost has a history in wonder and optical machines of early modern modes of technical perception, and has the possibilities for deceiving a phantom or “ghostly” pictorial phenomena into other images or objects, while presenting itself as a technology. 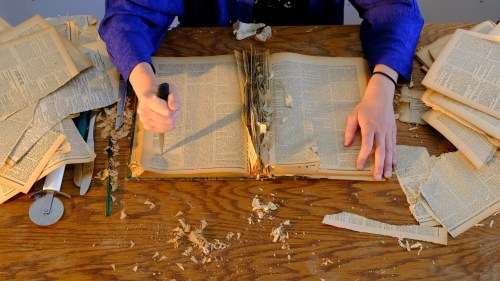